"The butterfly is a flying flower,
The flower a tethered butterfly."
Ponce Denis Ecouchard Lebrun
Rather apt, I think!
My recent laps around the river trail on the bike have paid off not only with several reasonable bird shots, but also with a few half-decent butterfly photos too. Now whilst my knowledge of the local bird population is pretty good, I know very little when it comes to butterflies. That it would seem, needs to change.
Some time ago, I posted on the butterflies I had so far managed to spot. They were the Cabbage White and the Common Brown Butterfly. Recently however, I spotted a few pairs of wings which I hadn't seen before. After some research, I also started looking a little more closely at what I had assumed was a homogeneous population of Common Brown Butterflies and discovered that all was not as it seemed.
During today's ride I snapped the following photos of what I believe was a Meadow Argus Butterfly a little upstream of the Queen's Park Bridge:

It had the same basic colours as the Common Brown, but different wing markings and the specimen I saw seemed somewhat smaller. It moved quite quickly, taking off in a straight line before settling again. Hopefully some better photos will soon be forthcoming.
On the opposite side of the river and a little downstream of the aforementioned bridge, I also came across this guy:

A Yellow Admiral. Like the Meadow Argus, it also moved quickly, but seemed to spend more time going in circles before finally settling on the leaf where I took the shots. Unfortunately by the time I crept close enough to take some good close-ups it had closed its wings. It also had the bad grace to position itself the wrong way up on the leaf, so no, the gum trees don't grow upside down along the Barwon, I have just rotated the photos to suit.
These were my "captures" for today, however a couple of days ago, I also took the following shot, but have been unable to identify the subject - whether butterfly or moth: 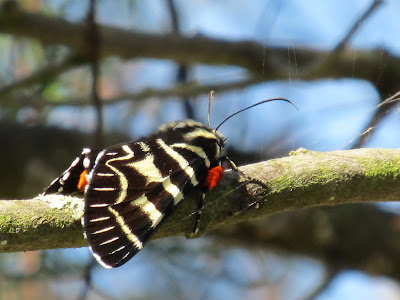 It was quite spectacular in flight with flashes of red as it fluttered around before finally coming to land on this branch, but try as I might, I can't find it on-line.
Ideas anyone?