Okay, I'm puzzled. I am hardly and expert when it comes to bird identification, but I thought I had my currawongs sorted - until yesterday. I had headed out for a gentle ride around the river via Fyansford and Breakwater, snapping some photos as I went.
As I headed down from Queen's Park towards Princes Bridge, I spotted a feathered tail hanging from a branch arching over the path. At first glance the underside was black and white striped. Upon closer inspection I discovered it was black tail feathers of varying lengths, each with a white tip giving the banded appearance. What was interesting about this was that the tail was attached to a Pied Currawong.
Now, to this point in time all the Pied Currawongs I'd seen had the typical white undertail and then a thin band of white at the tip - like this guy photographed in my backyard in April, 2010.﻿This one looked similar to the bird in my tree at home, with the exception of the tail feathers. Curious, I went back to the same part of the river again today to see if I could find him/her again. I didn't have to look too hard before I was able to locate not one, but a pair of currawongs in the same area as yesterday. Both had the same tail markings I had seen on yesterday's bird.
I spent quite some time taking shots and they allowed me to approach to within a few metres, watching closely but not particularly concerned by my interest. Initially they busied themselves shredding the bark off the branch they were perched on before scooping out any creepy crawlies to be found inside. The only concern they showed was when they moved to a tree near a magpie who then attempted unsuccessfully to send them on their way. The magpie soon retreated and peace was restored.
So, armed with what I hoped was ample evidence to prove my point, I finished taking my shots and left them to it.
Now, several hours and many webpages later, I am still none-the-wiser as to what I am seeing here. My question for those who read my blog and know more about birds than I do (and  suspect there are a few) is this: are these juvenile birds whose tail feathers have yet to grow out properly or am I looking at two of the six different subspecies of Pied Currawong?
Certainly one of the two birds I saw today had paler grey feathers on its chest and could have been a young one. Neither looked anything like the rather large Grey Currawong I saw a couple of months back near Baum's Weir which was the subject of an earlier post nor were there any calls from these birds - although I did hear others calling further upstream on the opposite side of the river. 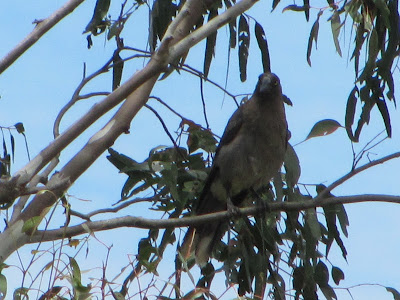 Finally, while I'm discussing currawongs, I noticed that the topic of the appropriate collective noun for these guys was a recent point of discussion on Denis Wilson's "The Nature of Robertson" blog here. When I first read this post, I was sure I had the answer to that one, but after looking back over my own currawong posts, it seems I do not, so I too would be interested to know if there is such a noun.
Posted by Jo Mitchell at 23:03