All things bright and beautiful

It is interesting to note that some of the brightest colours along the Barwon can be found on some of the smallest creatures. In season, the wattle trees provide a large and vibrant display our national colours whilst various introduced species add splashes of orange, purple and pink, however, down at ground-level, fluttering through the air and clinging to the stems of plants, there is an army of brightly-coloured insects.
On Monday afternoon, I was brought up short by a pair of what I think were harlequin bugs making their way across the path on the Highton side of the river:
They were in rather a hurry to get where-ever it was they were going, which made photography at close quarters a little tricky, however I did manage to get one or two reasonable shots. I gather that they are also known as stink bugs for the bad smell they emit when disturbed.
Then on Tuesday, I came across this rather shiny little guy:
My knowledge of bugs is even more limited than my knowledge of butterflies, so I have not been able to identify him/her.
On Friday I was back again and this time discovered a number of Plague Soldier Beetles (not a species I'd seen before) who appeared to be congregating for the purpose of doing what they like to do in large numbers. Relatively speaking however, this was a rather small gathering and I only saw one "couple".
These little critters - also known as Green Soldier Beetles - were hanging around near the new Breakwater bridge. I gather that they like to form what is known as a breeding swarm, hence the the "plague" reference in their name, but tend to move on once they've finished their business. Similar to the harlequin bugs, they have chemical defenses. Their bright yellow abdomen is an indicator to would-be predators that they taste rather unpleasant!

So far I haven't seen a huge number of beetles and bugs, but will keep an eye out. In particular, the Geelong Advertiser informs me that the local cricket population is undergoing somewhat of a population explosion. I can vouch for this as there have been a number of the little beasts making their way onto the netball court as I have been pursuing my other favourite pastime over recent days. I haven't seen any along the river, however I do tend to restrict my activities there to daylight hours.
Finally, I did come across one other species of insect as I was riding past the kids' play area at the Barwon Valley Fun Park on Friday. She is large and definitely colourful﻿﻿﻿﻿, but I'm not sure of the correct taxonomy here... 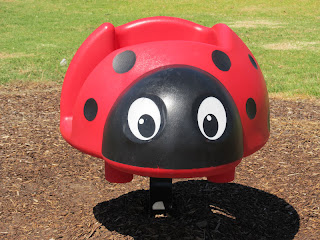