A tale of two rivers 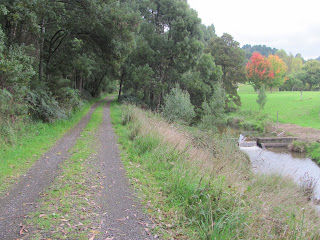 At the end of the previous post, we had stopped for a picnic lunch at the bridge across the west branch of the Barwon at Kaanglang Road outside of Forrest - a pretty spot with large trees rising all around.Next, we headed off, up a walking track which took us along the east side of the river towards the wall of the West Barwon Dam.
The terrain was relatively flat and the walk an easy one. The river at this point is still little more than a trickle, despite the presence of such a large reservoir so close by. This I discovered is the result of a controlled flow released from the dam by the relevant authority -  Barwon Water. What is not explained is how they decide exactly how much water is to be released from the dam at any given point in time and what impact that has on the river further downstream. For that matter, it would be interesting to know what type of river the Barwon would be if there were no dams, no weirs and no Breakwater to control the flows along its course. The Wautharong would have known.
The scenery along the track is a combination of towering gums to either side, a variety of non-native deciduous trees beginning to show the effects of autumn, clipped park lands and - somewhat incongruously - old apple trees which presumably are the remnants of another era. Regardless of their origins, the apples seem quite at home in their surrounds and are currently fruiting prolifically, cascades of fruit hanging from branches several metres high.
At one point, there appears to be a small weir which restricts the flow of the river and at another, so the visitor information at the dam informs me, is a pipe which feeds water from the West Barwon branch of the river across to the east branch. And so we continued, following the track, but - due to a noticeable lack of signage - not exactly sure where or how far we were going.
Despite this, we found ourselves after not too long at the foot of the dam wall and wondering how to ascend. Immediately in front of us was a wide spillway, obviously designed to carry overflow if the dam exceeds its capacity, however judging from the amount of graffiti to be found up its length, there has been no danger of an overflow in quite some time. To our right was a small foot bridge and a path which, we eventually discovered, would take us to the top of the wall. Another vestige of earlier times took the form of blackberry bushes growing to either side of the path, their fruit almost finished.
The view from the top was, as you might expect, panoramic. The wall is located just below the junction of the west branch of the Barwon River and Munday Creek which flows into the Barwon from the East.

Walking across the top of the wall, we were able to see a short distance up each waterway, both of which appeared to be heavily wooded. It is pleasing to know that logging in the area has finally stopped, giving our most important waterway a chance of survival.
As is to be expected with such a large man made structure, tourist information concerning the history of the area and the dam itself was readily available. From the board I learnt that the dam was built in 1965 by the then Geelong Waterworks and Sewerage Trust (now Barwon Water) and now provides the majority of the water supply for the greater Geelong region.
Whilst boats are banned and swimming or wading is not allowed in the dam, fishing (with a license) is allowed from the bank. The dam is stocked with the expected supplies of eels, both brown and rainbow trout, redfin, and blackfish but other than at the dam wall, access can be difficult from the bank due to the steep approaches and thick tree cover.
Perhaps more excitingly, the dam is also home to a small population of platypus, although I can not say we were lucky enough to spot one while we were there. After reading the boards and checking out the view, we headed back down, this time, taking the path down the opposite bank back to the car.
At this point, we still had a little time to spare, so we decided to head up a little higher and investigate the east branch of the Barwon.
What a difference a few mountains can make! The East Barwon I discover, is quite different from the West. Whereas the latter has been somewhat altered from its native state by exotic plantings, obvious signs of European influence and not to mention the dam, the east branch by contrast, is another world. It is cool, damp and has a distinct rain forest feel to it. Whilst the trunks of soaring gum trees rise above both rivers, along the banks of the east branch, the under plantings are much closer to the water and tree ferns are abundant. There are no clipped park lands, but rather a simple dirt track which winds its way beside the river, rising higher into the Otways as the track makes its way towards Lake Elizabeth.
By the time we arrived at the bottom of the track, we were limited for time. So after another quick cuppa to sustain us, we headed upwards. At one point we came upon a pool - a billabong.
Really running short of time at this point, we continued up the trail, hoping to make it to the bottom Lake Elizabeth which we knew was somewhere up ahead.
Once again, we'd studied up on our tourist information and had been informed that Lake Elizabeth was formed on 17th June, 1952 when a landslide blocked the east branch of the river, forming a natural dam wall. The landslide was not discovered until a party was sent to investigate the sudden cessation of the river's flow. A little under two months after the landslide, the dam overflowed running down a natural channel. A year later in August 1953, the top 26 metres of the dam wall was washed away after particularly heavy rains, reducing the lake to approximately one fifth of its original volume, and changing the course of the river. The resulting watercourse was straighter than the original and lined with boulders and gravel along its length, carried down by the second landslip. 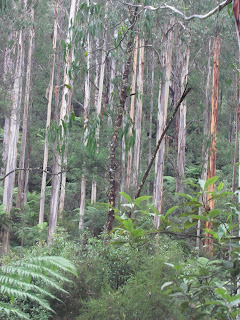 As we walked, the track continued to rise, steeply in places, until it was many metres above the height of the riverbed. Despite this, the gums growing at water level still towered above us. Eventually, with the light continuing to fail, an executive decision was made that we should walk until 5pm and if we had not reached the bottom of the lake by that time, then we would turn back.
Disappointingly, this did turn out to be the case. Whilst the walk was only a couple of kilometers, we were out of time. Lake Elizabeth and the promise of some fairly spectacular photographic opportunities would have to wait for another day. So we turned back and headed down to the car park, which somewhat surprisingly was busier than when we first arrived. Then, after a quick stop to use the visitor facilities, we were on our way home.
Posted by Jo Mitchell at 23:08