For those in the know, the first Sunday after Easter can mean only one thing - it's time to run a half marathon. The Geelong Half Marathon to be precise, hosted by the Geelong Cross Country Association along the banks of the scenic Barwon River. This year I saddled up and participated for the third year running (pardon the pun). As usual it was a battle to find the motivation to get out there and do it and as usual, once I'd finished I was pleased I had completed it. Not as pleased as the last two years when I'd run better times, but still happier than if I had not done it at all.
So, what is the half marathon, where does it go and who participates? As the name indicates it is a race run over 21,097m - half the distance of a full marathon. The Geelong Half Marathon starts under the James Harrison Bridge at 9am on the first Sunday after Easter. From there, runners take the scenic route around Belmont Common before heading along the path to Breakwater where they cross the bridge and head upriver to Fyansford. Next come a couple of twists and turns around the Fyansford Pub (unfortunately the only beverage on offer in the vicinity is water and that grabbed on the run from a helpful volunteer) before heading across first the Moorabool River, the anabranch which connects the Barwon and Moorabool Rivers and then across the Barwon itself for the long haul to the finish line.
All very scenic as I have previously described, but probably somewhat lost on the puffing populace propelling themselves with varying degrees of difficulty around the course. I wish I could say that I am so distracted by the pleasant surroundings as I run, that I feel no pain, but that is never the case. By the time I hit the 14/15km mark it is just hard work and the fact that I can envisage every rise and fall between there and the finish line doesn't help either.
Having made it as far as the finish line, the successful competitor is greeted by a variety of enthusiastic supporters and a battalion of over-anxious officials keen to retrieve the timing chip you've just taken for a 21km trot. The only thing left at this point is to stagger towards the drinks table, engage in a little rehydration and hang around to watch the remaining competitors finish and the winners receive their prizes.
And so to "who". Well, anyone who thinks they can make the distance really and with a little training that probably includes most of the healthy population. Over the last few years the field has been growing as more people decide to give it a go, but at the pointy end of the field, it also provides an opportunity for the local up-and-comings to have a crack against a wider field as there are always a few decent runners from out of town. A half marathon is also a good distance for those in training for the full marathon and in particular, the Great Ocean Road Marathon which is run only a few weeks after and which boasts an international field of some repute and a view to die for.
By comparison, the Barwon may not be quite so spectacular, however it is a comfortable course with a few rises here and there to break the monotony, but nothing too soul-destroying. The trees which line the route also provide some welcome shade should the weather be a little warm for running (although there's been no serious risk of that in the last couple of years).  And when I really need some distraction from the state of my legs and my lungs, there is always the river to watch or birds to count.
So far, I haven't ventured much beyond half marathon distance which I have run many times (although only three times under competitive conditions) but for some time I have been considering running from Geelong to Queenscliff along the Bellarine Rail Trail (about 34km from the Show Grounds to the Queenscliff Station). However, that's for another time. On Sunday, 1st May, along with exactly 799 other runners, I hit the river trail and ran the "half". 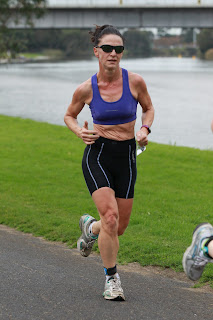 So, how did I do? In comparison to my previous two runs it was a disappointment and I by no means troubled those at the front of the field, but then, I never do. I did however, finish in roughly the top 25% of women in my age group and in a similar position relative to all women (318) in the field. Overall, I came 366th of 800 runners, so I beat most of the field home - men and women. Maybe by next year I'll have improved my times again - or at least come to terms with my dwindling pace.
I should I guess express my thanks to the unknown runner who, in the last hundred metres or so, decided that a sprint finish was the way to go and thereby no doubt improved my time by some several seconds. I'd overtaken him a short distance earlier and thought I had him, but he pipped me on the line.

So, after handing over my timing chip, knocking back a water or two and catching up with a friend who'd made it home before me, there was nothing to do but wait for the presentations and head for home and a hot shower.
Posted by Jo Mitchell at 21:05