While I was already in the district - so to speak - I thought I would stop by another couple of inns along the way. Both located close to the Moorabool River on the route to the goldfields, and both interwoven with the Eureka Hotel, Leigh Road; subject of my last blog post. First: the Separation Inn.
As I alluded to previously, the hospitality industry of the 19th century, was a volatile scene. Hotel owners often came and went within a few years, licensees even more frequently. Depending on the behaviour of the clientele, the number of hotels in the district, the state of the buildings, the financial situation or reputation of the licensee and a host of other reasons, publicans' licenses could be granted or denied on an annual basis. This was also the case for the less expensive beer, and colonial wine licenses which restricted what the licensee could serve (usually a cheaper product) and often attracted a less than salubrious class of patron.
The end result it seems, was that insolvencies were relatively common and that licensees switched venues on a regular basis, often holding more than one license at a time. This was certainly the case for the Separation and the Clyde Inns on the road to Buninyong and Ballarat.
The older of the two, the Separation Inn was amongst the few public houses to be found between Geelong and Buninyong prior to the beginning of the gold rush in 1851. As I have found with other hotels, there seems to be some uncertainty as to when the hotel first opened. The publication Hotels, Pubs & Inns of the Geelong Country Districts (Jennings, 2009) indicates that the hotel was first mentioned in the Port Phillip Herald on 27th March, 1843 and was owned by George Russell of the Clyde Company. At this time, I am uncertain exactly where Russell's hotel was located and my (admittedly somewhat cursory) examination of the Clyde Company papers for 1843 showed no correspondence regarding the hotel.
Another reference to the hotel was made by Henry Mundy who passed that way with his family in October, 1844. Writing many years later in the early 20th century, he recalled that they "reached a swamp, near where the old Separation Inn used to be on the road to Ballarat" however, whether this refers to the hotel owned by George Russell, or to a later structure is debatable as Mundy passed that way many times over the following years and may have been referring to a newer building.
Regardless, it seems any original hotel owned by Russell, was not around for long. On 28th October, 1850, the Geelong Advertiser published the following notice: 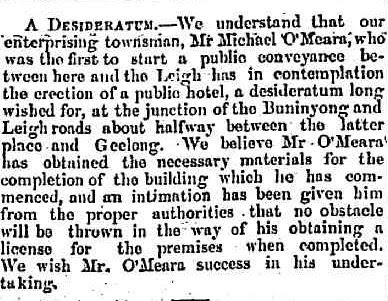 
Every holder of a publican's license shall at the request of any officer or constable of police receive into the house mentioned in such license or upon the premises occupied therewith any dead body that may be brought to such house for the purpose of an inquest being held thereon and for every dead body so received he shall be paid the sum of one pound out of any money which may be appropriated for such purpose and if he shall refuse to receive such dead body for the purpose aforesaid he shall on conviction thereof before any justice forfeit and pay any sum not exceeding five pounds.

Today, this requirement is no doubt obsolete and any sign of the Separation Inn is also long gone. The land on which the inn stood is now occupied by a farmhouse which fronts onto the Midland Highway and which is the home of a local fencing company. The old road to the Leigh has been realigned to meet the highway almost 2km to the north west and travellers no longer stop for a drink or a meal at the Separation Inn.