A very malicious hoax was perpetrated yesterday. A notice was brought to this office in the usual form announcing the death of Mr Frederick Lock, of the Eureka Hotel, Leigh Road, and also that the funeral would take place this morning. Fortunately for himself, Mr Lock, so far from being deceased, was able to read the fictitious notice, and to come into Geelong to give notice of its being a fabrication. The punishment to be inflicted on the perpetrator of so heartless a hoax should be severe.

But it was too late. The Ballarat Courier copied the death notice a day after the Advertiser, followed by the retraction, then, a number of other papers across the state also published the death notice over the course of the following month. To this day, the effects of the hoax continue to be felt. Frederick Lock is listed in the Bannockburn burial register with date and place of death as per the Advertiser article, although it is noted that his death does not appear in the Victorian Pioneer Index.
This as it happens, is not quite true. Frederick's death does appear in the index, although not until 1894 and listed as Edward Frederick Locke. According to his will, he died on 14th February, 1894 and cemetery records show he was buried at the Eastern Cemetery the following day. I could not locate a headstone.
But what happened in between? After surviving his own reported death, Frederick was once again in financial difficulty when in October, 1870 and with the Eureka still unsold, he was declared insolvent and a writ of Fieri Facias was issued against him, meaning the sheriff took possession of the hotel and some nearby land also owned by Locke. Not long after, he appears to have left the district, eventually finding his way to Queenscliff on the Bellarine Peninsula. At the time of his death in the Geelong Hospital, his occupation was stated as miner.

As for Locke's hotels, the Separation Inn will be the topic of my next blog post, however it seems that despite the earlier mortgagee's auction, Locke retained the property until July, 1870 when it along with the Eureka and a block of land, were offered for sale when Locke was declared insolvent. On this occasion, a buyer for his Eureka Hotel was forthcoming and John Henry Jones became the new owner, although it does seem to have created a little confusion in the district (which perhaps persisted to recent times) as this extract from the Geelong Advertiser of 6th June, 1871 states:

"An impression prevails at Leigh Road that a third public-house has been erected at Leigh-road. If we are rightly informed this is not correct. The supposed new house is stated to be the old Eureka Hotel purchased by Mr J.H. Jones, in Mr Lock’s estate, and re-christened the Railway Hotel. The mistake has probably arisen out of the fact that Mr Jones has made additions to the premises.

Further renovations and additions were undertaken in 1877 and he continued to run the hotel for another 13 years. However, hospitality during the nineteenth century was a volatile industry in which to work, with publicans often forced into bankruptcy or to sell up after only a couple of years in business and Jones' was no exception. In addition to the Railway, Jones also owned the Clyde Hotel (located on the Ballarat Rd at the Clyde Rd intersection). In July, 1883 it was burnt to the ground, however newspaper reports at the time indicated that it had not operated as a public house for some time and was instead used as a farmhouse.

Things did not improve for Jones when the following year he was declared insolvent and and charged with obtaining money by deception, however the court saw the matter as a misunderstanding by his bank rather than a deliberate attempt at fraud. Regardless of this, as an undischarged bankrupt, the liquor licensing bench refused to renew Jones' publican's license. An attempt to have the license renewed in the name of his daughter was declined as she was an unmarried woman, living with her father, whilst a third attempt was also declined on the grounds that the applicant was merely a dummy for the Jones family who were still living at the hotel. Mrs Jones it was noted was too ill to move.
By December, 1885 Mrs Jones had died as a result of her illness and their daughter Lillias once again applied for a publican's license on the understanding that it would be transferred to her father once his insolvency had been settled. This time she was successful and the license was granted. It was not however, until April, 1887 that Jones received his certificate of discharge. By December, 1888 he was once again the licensee of his own hotel. Finally, in November, 1889 Jones sold out to William Flahive, with a clearing sale being conducted on the premises in January, 1890. Flahive was also the owner of the Exchange Hotel in Geelong.
John Jones died at Clifton Springs the following year on 11th May, 1891 and was buried with his wife Emma at the Bannockburn Cemetery.
William Flahive continued to run the hotel until his own death in November, 1901 at which time, the license was taken over by his widow Mary who after a few years, leased the property out. William was a prominent member of the local racing club and well respected in the local community with the hotel often used to host functions for the Leigh Road Racing Club. When in 1908 the Railway Hotel came before the Licenses Reduction Board, it received favourable reports from a host of locals including the police constable who considered it the best hotel in the district and presumably was spared from closure.
Mary Flahive died in 1910, after which the hotel underwent successive changes of licensees and presumably owners, with none staying more than ten years. In 1936 with Thomas Norton as the new licensee, a major overhaul of the hotel was approved by the Licensing Court (The Age, 29th September, 1936):


Plans for alterations to the Railway Hotel, Bannockburn, near Geelong, were submitted. These provide for material alterations internally of the present building, which was erected 60 or 70 years ago. Old parts will be renewed, a new roof will be put on, a septic tank, and hot water system will be installed, and generally the building is to be made as good as new. The approximate cost of the work will be £2250, and the alterations will be finished about the middle of January. 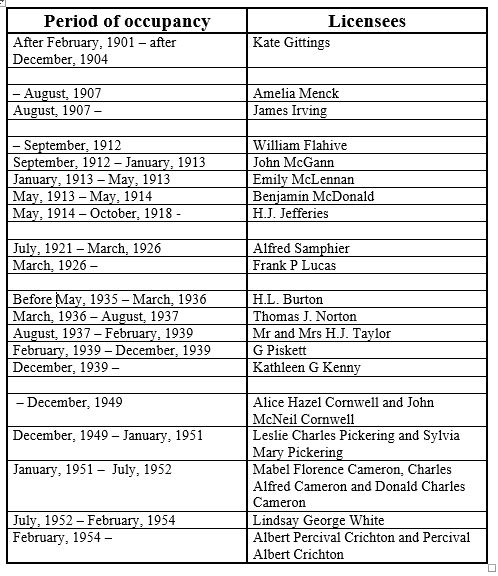 As of August, 2012, The Bannockburn Railway Hotel Pty Ltd is a private company servicing a growing population approaching 4,000 people. It is many years since I've been for a meal, but I suspect it it high time I headed back!