Creatures of the night

A short wander along the Barwon below the Mount Brandon Peninsula yesterday, yielded some unexpected photo opportunities. The first arose as we followed the rough track around from Buckley Falls towards Baum's Weir along the south bank of the river.
I am aware of plans to improve the recreational facilities along this part of the river as nearby residential development progresses, but I was surprised by how many people already seem to be aware of the walking and fishing opportunities provided by this rather informal stretch of parkland.﻿﻿﻿
At one point I paused to listen to the birds, trying to locate the owner of a call which I have heard many times, but had been unable to attach to a particular species. I was once again unsuccessful in my attempt at identification (I have since discovered it was a Fan-tailed Cuckoo), but as I shushed the boys in the hope of spotting my quarry, a passerby - also with two boys of his own in tow - informed me that there were three Tawny Frogmouths in a tree up ahead.﻿﻿
I hung back still hoping to solve the puzzle while the others went on ahead, however they were soon back and reporting that they had found the frogmouths, so we quickly headed up the track lest they decided to depart.
Fortunately, being the middle of the day, they were rather disinclined to go anywhere and were happy to sit on a rather low branch of a dead tree as we approached to within only a few metres. Even four small boys circling the vicinity did not seem to disturb them.
In fact, the response of the three birds to our presence was almost amusing. One, perched below the others, refused to acknowledge our presence in any way whatsoever, adamantly insisting that it was nothing more than a dead tree branch, its eye slitted just slightly so as to watch us, its beak pointed skywards to further enhance the illusion. 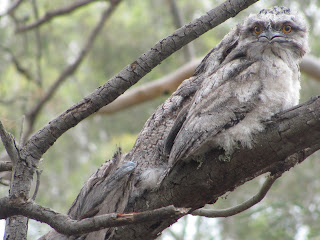 The other pair of birds were less concerned with disguise. They stood close together, eyes open, but not moving - with the exception of one who was bold enough to turn its full gaze on us. It stared very directly with its piercing yellow eyes, but didn't seem too worried that we had blown their cover and interrupted their day's rest.
I hope their disturbed sleep didn't leave them yawning on their perch when they should have been out pursuing their rather slimy, crunchy prey last night. I discover that are happy to consume pretty much anything which scuttles, slides, flies or hops and is smaller than themselves. Moths, birds, frogs, lizards, slugs, snails, insects and worms are all fair game and usually pounced upon from above as the frogmouth drops from its perch to the ground.
Nor were the frogmouths the only night birds we spotted on this particular visit to the river. On our way back downstream we saw a Nankeen Night Heron (aka Rufous Night Heron). I was not particularly surprised as I have seen these birds here before and in daylight too. In fact on today's visit what was possibly the same bird, was once again, standing on the weir at Buckley Falls. Despite this species feeding at night, it, along with a Great Egret, a White-faced Heron and a Little Black Cormorant were all quite obviously fishing at various points along the weir, using this man-made structure to best advantage.They, like the Wathaurong, clearly understand the culinary opportunities offered by the Bunyip Pool.
Posted by Jo Mitchell at 22:43