Today I was once again back at the Moorabool River Reserve and on this occasion was treated to the sight of several species of birds I have not so far seen along the banks of the Barwon River. That being the case, I will use this blog to post a few photos of today's finds.

This little fellow - yes, I believe it is a male - was quite obliging and happy to sit and pose for me. It took a bit of hunting around to discover his identity, but I believe he is a purple-crowned Lorikeet. Wikipedia informs me that these little lorikeets are found only in the south of West Australia, the south east of South Australia and the west and central districts of Victoria.
My next exhibit was a little less obliging as it kept its distance and was back lit to such an extent that it was hard to see colour. None-the-less, I believe this was a Sacred Kingfisher and one of a number in the area. It seems these birds are common across most coastal regions of mainland Australia, although I have not seen them elsewhere.
There were many other species around including a Black-chinned Honeyeater which I had not seen before. Unfortunately I was unable to get close enough for a clear shot of it. Also present were a multitude of Red-rumped Parrots and Eastern Rosellas - more than I have seen in any one location prior to this.
The following photo is included purely because I liked the shot and it was a very pretty section of the river, with water trickling over a little set of rapids. It is probably also worth noting that the ancient  rocks over which the water is falling, are part of the same outcrop of granite as the nearby Dog Rocks which date back to the Devonian Period of the Paleozoic Era some 350 million years ago. Remembering of course, that the Otways where the headwaters of the Barwon rise date only to the Cretaceous Period of the Mesozoic Era, some 145 million years ago. These rocks are really old! 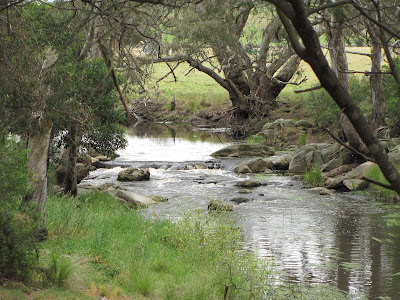