Anyone who regularly uses the track which runs alongside the Barwon will eventually become aware of a confusing array of what I like to think of as secret symbols. In reality they are not at all secret, on the contrary, they are for use, if not by the public in general then by particular groups of the public. They come in a variety of colours and an array of different styles and are positioned at very specific points all the way along the track from Breakwater to Fyansford and back.
So, what are they? Well, to be honest, in most cases I don't know, but I would be interested to find out. 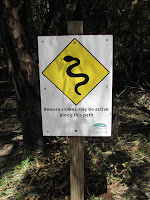 Some are obvious, such as those indicating that cyclists and pedestrians are to share the track. They are somewhat stylised as I don't think anyone outside a circus could ride a bike which actually had wheels shaped like that and were a pedestrian to try to run or walk any distance in that position, he or she would very soon find themselves flat on their face. Other signage is also quite clear: the phrase "beware snakes may be active along this path" is a standout.
One set - probably the most prominent - are known to me, in fact you could say they rule my running life. They are the kilometre marks for the half marathon which is run each year along the banks of the Barwon on the first Sunday after Easter. So far, I've participated twice. 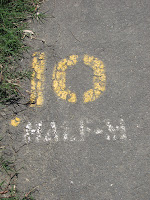 Somewhat confusingly, the first number which appears is at the 3km mark. This is because a single lap of the track equates only to about 18.5km whereas the full distance of a half marathon is 21,097m. The result is that a few extra bits have to be added here and there to make up the missing 2.6km - give or take.
Consequently, the event starts under the James Harrison Bridge on the south side of the river and from there proceeds under the Moorabool Street Bridge and off the track where it takes in a scenic lap of the ovals next to Belmont Common before returning to the river and continuing on towards Breakwater. Perhaps not surprisingly, I can describe to within metres, the location of every one of the remaining markers on the track - but I won't. Suffice it to say that markers 3 and 4 are before the Breakwater, marker 5 does not exist as it is located on an unsealed section, 6 is where it should be and 7 is hiding behind the Barwon Rowing Club clubhouse. The 14km mark likewise does not exist as the second additional section used to extend the distance is a contrived loop around the Fyansford Hotel.
Unfortunately this is less than three quarters of the way through the course, the remainder of which lies on the opposite side of the river, finishing at last 97m past the 21km mark which seems to disappear each year only to be re-marked before the race somewhere in the vicinity of the James Harrison Bridge.
Whether I am running full half marathon distance or not, I always use the markers for the half to estimate the distance of whatever run I intend to do and to keep me going as I run. Calculating what proportion of my run I've completed or - less encouragingly - have left to go, can be a useful distraction from the state of my lungs and legs. At the very least it makes a change from counting birds. 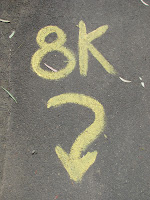 For the record, if I run from home, do a complete lap from Landy Field to Breakwater, up to Fyansford and back then run all the way home, the distance is a touch over 21.1km - a neat half marathon distance.
So much for the half. What are the other markers? There are small, stencilled yellow numbers marked every 500m which appear somewhere near the McIntyre Bridge but seem to have their zero point in the vicinity of the rowing sheds and continue upriver for some kilometres. There are thick yellow numbers which also mark kilometers but which come with curved arrows pointing back the way they've come from and presumably indicating various turnaround points at differing distances from an unknown start location and there are a series of freehand spray-painted white numbers with the initials SILC. I think from memory these were originally sprayed in red and overpainted with the white. I have no idea what SILC stands for but would hazard a guess that the C stands for club. 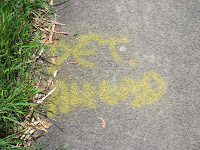 More recently, I noticed a couple of warnings spray painted on the path near some pipe works. The only problem is, that at running pace, they are too small to read - tricky! The sign to the left is apparently telling me that there is a detour ahead...if I slow down long enough to read it that is...
Posted by Jo Mitchell at 22:20