On Saturday I was due to go for a run and I figured it was time I made the effort and headed up to Fyansford to see what state the river and surrounds were in after the January floods and after a torrential downpour on Friday courtesy of the remnants of Tropical Cyclone Yasi. I had expected to find mud and sections where the bank had washed across the track. I was not disappointed. At various points I dodged mud, clay and small rockfalls. What I had not expected to see was the river creeping up its banks. The rainfall had been heavy, but had only occurred within the last 24 hours, which is not long enough for water to flow down from the Otways to flood the lower reaches of the Barwon.
To be honest, I wasn't certain the river level was rising. Rather, I suspected it was just flowing a little higher as a result of several months of rain. Just past Queen's Park the water level was almost level with the path. At Fyansford, the Moorabool was flowing as high as the footbridge which leads to the Common. The river was definitely up. Interested and running reasonably comfortably (a little too comfortably given my eventual run time) I headed across the Common and back towards town. A little more than a kilometre down the track I noticed that a section of the river contained a pool of water which was much clearer than the rest which was quite turbid. The distinction between the two was quite pronounced and there was a section where the two combined, with the clear water tailing off and swirling in to blend with the muddy.

I was puzzled briefly until I realized where I was - I was passing the confluence of the Moorabool and Barwon and that explained the colour difference. I'd been told previously that much of the mud which coloured the water through town had found its way from the Moorabool, rather than the Barwon. Looking at the two visibly different streams of water merging, this was clearly the case. The water from the Moorabool was distinctly muddy whereas that from the Barwon was relatively clear. If only I had my camera!
Once I'd finished my run, I came home to check on the Bureau Of Meteorology's website. Yes, the river was indeed rising, but interestingly, only through Geelong  and upstream at Pollocksford  and the Moorabool.
I hadn't seen that before and I can only assume that such is the level of saturation of the surrounding countryside that any significant rainfall can presently cause localized flooding.
﻿﻿And flooding it was - well, according to the official Bureau website it was not quite a flood as levels hadn't reached the official "minor flood" level of 2.5m - but when I returned to Fyansford at around midday on Sunday, the Common was  once again awash. The path I'd run down only the day before was under water in several places and any low-lying ground was underwater. I'd hoped to get a couple of shots of the confluence of the two rivers, showing the different water flows however, as I hadn't brought a pair of waders with me, this proved an impossibility so I had to settle for another set of scenic pics of soggy river banks. At this point, I was trying to ascertain whether the water level was still rising so I decided upon a spot of impromptu time-lapse photography on a section of path near Queen's Park - where incidentally, the path under the bridge was once again underwater. 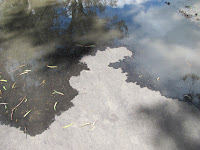 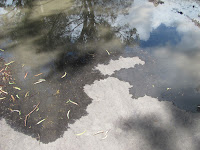 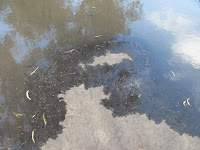 After several minutes and some none-too-scientific observations, I decided that yes, water levels were still on the rise. So it seemed, from the sign next to the nearby "duckpond" were levels of blue-green algae, giving rise to interesting swirls of green on the surface of the pond. This did not however appear to be having any effect on the teeming aquatic life which lives there. I guess it can't read the warning signs. 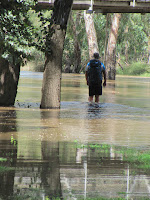 Whilst I was in the process of checking out the surrounds, I came across another flood sport - hiking. As I stood taking photos, a lone hiker with pack on his back waded up out of a submerged section of track from the Fyansford direction and headed off under the bridge, back into the water and on his way. Exactly how he managed to determine where the track was I'm not sure. I'd been there the previous day, but couldn't be sure where exactly it was I'd run. So much for avoiding floodwaters! By this time, I was ready for lunch, so I decided enough was enough. Perhaps I am becoming blase about floods on the Barwon after the last few months, but this was only a little one in the scheme of things, so I went home.
﻿
Posted by Jo Mitchell at 00:05