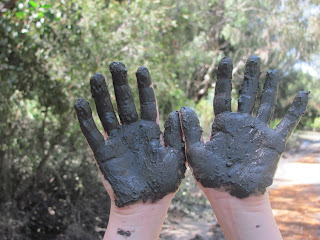 One of the most noticeable remnants after a flood event - aside from the smell - is mud. It is everywhere and on everything. I've seen this several times before and knew it would be the case in the aftermath of the current flood. I also thought it would be entertaining to take the boys to have a look. Boys like mud - right? Well, some more than others it seems and mine not particularly.
We headed from the Breakwater back towards town skirting around, and eventually wading through, several low-lying sections of the track which were still partially submerged. In addition to the mud, there was the usual array of debris, although I fancy this was somewhat less than in previous recent events so perhaps the river had been at least partially flushed clean before the present deluge arrived.
﻿﻿﻿﻿﻿ ﻿﻿﻿﻿﻿ What had increased noticeably was the amount of wildlife. Perhaps, since the boundaries between river and bank had become somewhat blurred, a few creatures were having trouble distinguishing between the two. In particular, skinks. Until now, I'd not seen them at the river but on this occasion we saw two making the most of the mud.
The birds also seemed to be rather thicker on the ground - in some cases quite literally as I noticed on an earlier visit whilst water levels were still high, that the local population of silver gulls (aka seagulls) were standing shoulder to shoulder on any dry patch of land they could find.
Prior to heading to the river I had read in the local media that Reedy Lake (downstream of the Breakwater) was having what is called a "black water event". This phenomenon occurs when large volumes of water are discharged into the lake system, forcing oxygen out of the water causing the death of fish and wildlife. In the case of the Barwon, the increased water flow caused the death of a variety of fish and eels further upstream which were then dumped into Reedy Lake along with the increased in water volume, causing a loss of oxygen and further loss of fauna including ibis chicks and ducklings.
With this in mind and hoping to see some evidence of this occurrence for myself, I loaded us back in the car (minus the boys' shoes which had been relegated to the boot) and headed first for Reedy Lake at the bottom of Coppard's Road and then, in the limited time I had available to the end of Moolap Station Road.
﻿ I have to say that I didn't see a single dead fish or eel, but I could certainly smell them! Whilst the river in town certainly smelt muddy, at the Lake, it was not only muddy, but salty and fishy at the same time and quite unpleasant. This was also significantly different to previous occasions when I'd been to this area. Whilst there were less visible signs of flooding here, the smell certainly indicated that all was not as it should be. The water which I could see, certainly had a brown hue to it and the water level had been somewhat higher than when I arrived, but in general it did not look too different.
﻿﻿
One unexpected, but for me useful side effect of the flood was, as I mentioned earlier, to condense the space available to bird life. In fact I spotted two species I had not to that point seen anywhere else along the course of the river which perhaps had been forced by the floods to parts of the river system they would not normally inhabit. Firstly, at Coppard's Road, I snapped a Royal Spoonbill, sharing a narrow spit of land with a black swan, an Australian White Ibis and a Pied Cormorant or two.
﻿

Secondly, at Moolap Station Road I found quite a number of Magpie Geese - large birds and not easily missed - which had definitely not been present previously. What were largely absent however, were the dozens and dozens of Ibis which normally inhabit the area, indicating that the disturbance to the local bird life was quite real.﻿ ﻿﻿ ﻿﻿
﻿﻿ At this point I have yet to se﻿e other parts of the river system to see what other effects of the flood may be present, however it was also reported that a large bloom of dirty water was issuing from Barwon Heads into the sea as far as Point Lonsdale. Another unfortunate impact of this out flux of floodwater, I am informed, is that the mass of of fresh water forms a layer over the top of the higher-density saltwater, killing off marine fish and wildlife which does not survive well in a freshwater environment.
﻿﻿
﻿﻿
Posted by Jo Mitchell at 22:50