Time to get running

By Friday I'd decided that it was time to get back into some running. I was a netball game or two short for the week and hadn't covered any serious distance since the Run Geelong "fun" run on 21st November, so I dragged out my running gear and headed down to the river as per usual.
Having walked the Breakwater section on Tuesday, I headed upriver to Queens Park, taking it relatively easy. It was somewhat windy, which tended to make the going a little more difficult than necessary and at times the sun would come out from behind the clouds with a burst of heat further adding to the discomfort. None-the-less, my progress wasn't too bad and I was able to maintain my pace.
Being a Friday morning, there were people everywhere; most of them walking in smaller or larger groups, including a rather large cohort of elderly walkers who I think have a regular assignation with that section of the river and who require some serious navigational effort to avoid.
Pairs of women seemed to be a common combination of walking companions as did younger mothers with babies and toddlers in prams, all of which had to be circumnavigated. The male of the species was rather under-represented in all age groups and other joggers and cyclists were at a bare minimum.
As I thumped my way around the track, I made my usual attempt to notice the birds, however as I hadn't run for nearly three weeks, I think I spent more time concentrating on my lungs, legs and dodgy achilles than on the resident fauna. Having said that, I do find that even at a slow jog, it is significantly harder to observe your surroundings than it is at a walk, consequently, many things no doubt go unobserved. 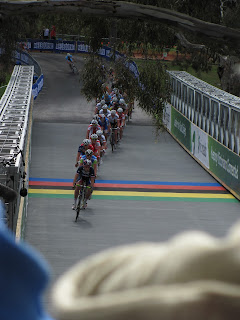 One thing I did notice however, was the remnants of the disruption caused by the erection and subsequent removal of the temporary Bailey bridge which was put in place over the river at Queens Park for the World Championship Cycling held in September/October. The event was fantastic and the views of the cyclists from the permanent Queens Park Bridge were impressive, but having the section of the river trail from Queens Park to Fyansford out of action for more than a month was a pain, to say the least. However, everything has been returned pretty much to rights and the track is open again. Now to start using it...
On this occasion, running only as far as Queens Park, I managed to cover a little over 14km which wasn't too bad given my recent lack of application and in a time which was within acceptable limits - just. I even managed to run the 1.4km uphill section from the river to home. I figured it was the least I could do considering recent advice that to improve my running times I should take up some fairly serious uphill training. I am still in two minds about this as my competitive urge is probably almost as great as my desire not to burst a lung during training sessions. I don't do hills! 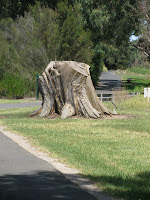 A final distraction to deal with as I headed back through town was the rowers, or more correctly their coaches with their bikes and megaphones, exhorting their charges to keep their line straight or their strokes even. As for the coaches themselves, keeping their own line straight on one side of the path doesn't seem to be a priority. Getting past the rowing sheds can be an interesting procedure at that time of day too. Pedestrians and cyclists are required to give way to the odd-looking 16-legged crustaceans that regularly make their way between the river and the rowing sheds, so once again, evasive action was be required.
From there, it was plain sailing to Swanston Street and the stump which has come to signify that the end of my run is, if not actually in sight, then at least no more than 1.4km away. I have really come to appreciate the sight of that stump!
Posted by Jo Mitchell at 17:36