In search of more birds and to check out the new facilities reported to have been built I set out for Tait's Point for the first time since my first visit earlier this year. Well, the facilities, such as they were, consisted of a viewing platform similar to that at the end of Ash Road on the other side of the lake and a few rock retaining wall thingies held together by chicken wire. There was however, no sign of the reputed loop trail along the edge of Hospital Swamp. Perhaps it is phase two of the plan.
What I did find, was a somewhat larger array of birdlife than last time. I very quickly discovered a number of crested pigeons who were quite happy to be photographed at a distance of only a few metres before flying away with that peculiar whistling noise their wings make. As usual, Superb Fairy Wrens were everywhere along with Red Wattlebirds, Willie Wagtails and a small, light brown bird which despite a lengthy game of hide-and-seek, wouldn't sit still long enough to be photographed and identified.
On the water, I discovered what I later found to be a Musk Duck, an odd little black duck with a bulbous scent gland hanging below its beak and a lone Black Swan. It seemed that the majority of birds, rather than making their home at Tait's Point were merely passing through. Overhead I saw a pair of Black Swans, a flock of Silver Gulls, a bird of prey which didn't hang around long enough for me to identify, a Little Black Cormorant and on several occasions, what I suspect was some species of tern, but again it didn't wait around for me to find out. Unlike Reedy Lake and the opposite side of Lake Connewarre, there were very few birds actually on the water, most were in the air or living in the scrubby cover on the edge of the lake.
Next, I headed back towards town hoping to see some of Hospital Swamp and the sections of the river below Breakwater. This proved rather more difficult than I hoped and in the end, the best views I could find were from the end of Horseshoe Bend Road in Marshall. The river at this point was similar to some of the in town sections; relatively wide and lined with reeds. Swallows, Willie Wagtails, Australian Reed Warblers and a nest of Mud Larks were all around. Perhaps the most interesting part of the view was the old buildings and overgrowth on the opposite bank of the river at Breakwater.

Which was where I headed to next. I had intended for some time to investigate a short overgrown section of the river past the breakwater. There is no formal path, but more of a goat track - worn by I didn't really want to know whom - which follows the river a short distance along the south bank. I took a few shots of the river and the opposite bank and was already feeling somewhat uncomfortable about the length of the grass to either side of the track. I turned back, then changed my mind and decided to push past an overgrown section into a clearing where I found myself perhaps five metres from a rather large, but fortunately rather immobile brown snake. 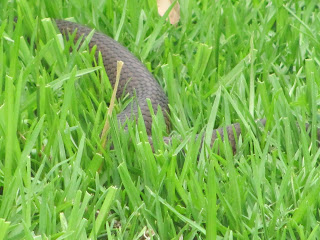 Needless to say, I beat a rapid retreat, but not before managing to snap off one rather hasty shot. I wasn't hanging around to wait for it to take up a more flattering position. Consequently, I'm not exactly sure how long it was, but if diameter is anything to go by - it was big! I don't think I'll be heading back to that part of the river any time soon...
Posted by Jo Mitchell at 23:38