Last Friday and Saturday for the third time, I participated in the Mountain to Mouth Extreme Arts Walk. Within minutes of the Gathering of the Elders Ceremony at Big Rock in the You Yangs, the rain stopped and the sky cleared.
The official business of "welcome to country" by members of the Wathaurong community was followed by the collection of water which - as in previous years - was to be carried in "Canoe" to the mouth of the Barwon River at Barwon Heads.
After an array of speeches by various political representatives from federal, state and local governments, we were accompanied on our way by a forceful wind which pushed us onward to the second station at Lara.
This time around we started earlier and Canoe rested for longer at each station, meaning that there was ample time to take advantage of a sausage sizzle provided by the RSL and examine the artwork.
The slower time schedule did not suit everyone, with some walkers finding they were keen to depart each station sometimes even in advance of Canoe's arrival.

After departing Lara we followed the now familiar route beside Hovell's Creek and wound our way to Limeburner's Lagoon where we were treated to more displays of performance art and a rest at the third station where participants were encouraged to get involved in a tree planting.

Once again, after an extended break - and in my case, a change of shoes - we were underway, walking beside Limeburner's Lagoon as the sun set.
By the time we reached station 4, darkness had fallen and so had the temperature, making the extended break rather chilly. As several took the opportunity to eat, we were entertained by recitals from Wathaurong man Brian Gilson and a local choir group as we waited for the arrival of Canoe.
By 7:30pm and in complete darkness, representatives from Deakin University took up the challenge of conveying Canoe to its resting place for the evening at Johnstone Park.

Along the way, we were regaled by more performance artists popping out of the night, including at one stage a pair of opera singers in full voice and full costume!
Finally, in rather chilly conditions, walkers assembled with Canoe and we processed into Johnstone Park (Station 5) for a lap of honour before taking a front row seat to watch the spectacle of the Gathering of the City. 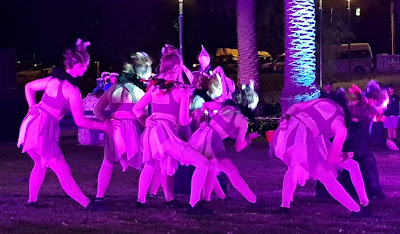 At some point after 10pm it all wound up and we headed off to rest for a few hours before convening once again in the pre-dawn for the walk to Barwon Heads.
Posted by Jo Mitchell at 23:33