Branching out: a walk along the Moorabool

Recently I had the opportunity to view a section of the Moorabool River which I had not seen before. At the invitation of Cameron Steele - co-ordinator of the community group People for a Living Moorabool or PALM as they are known - I accompanied a small group of interested walkers along a short section (a little over 3km) of the river heading downstream from Slate Quarry Road where it crosses the Moorabool to the north east of Meredith. The bridge of the same name which crosses the river at this point dates, I believe to 1922, and may be the topic of a future post.
Over the course of several hours we made our way along the riverbank, sometimes walking easily, sometimes rock-hopping and scrambling, sometimes climbing up the occasional steep incline. 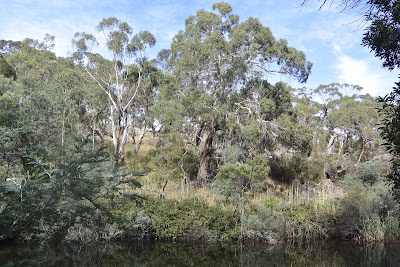 The geology of the river through this section varies significantly. In some places, sections of the slate for which the nearby bridge and quarry were named can be seen whilst in others, aeons old granite is visible. The relatively newer basalt which flowed from nearby volcanoes active within the last few million years, now covers sections of the older landscape and in places, these relatively recent lava flows have even changed the course of the river, filling the original river valley and forcing the river to find a new course through the rocks. 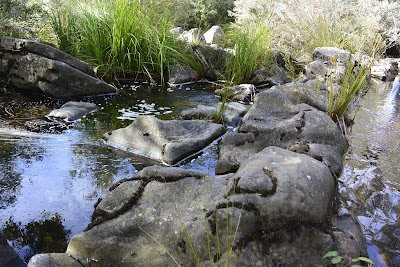 In places along the length of the river, refuge pools - some of them measured at over 8m deep - provide protection for aquatic life during periods of low river flow and in drought conditions. At the time of our walk, water levels were falling after the release of an environmental flow or "summer fresh" designed to mimic the variable seasonal water flow of the river prior to European settlement. 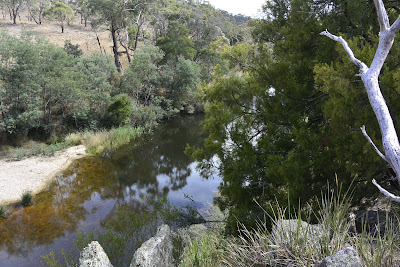 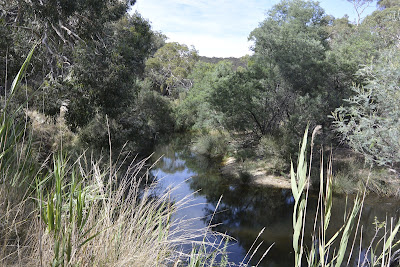 With the combined knowledge of the group we were able to observe a variety of native plant species such as cherry ballart - a native species of sandalwood - banksia and of course a multitude of eucalypts. Unfortunately, in addition to the native species, we also observed a number of invasive weeds in the form of willows, thistles, gorse bushes and some sizeable stands of blackberry. 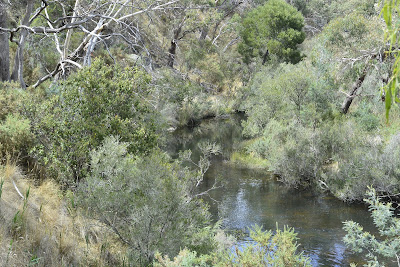 Finally, we completed our walk by removing our footwear and wading across a shallow, rock-lined section of the river; a pleasantly cool experience on a warm summer's day. From there, it was a short walk up an access track to where Cameron's trusty Land Rover was waiting to return us to our starting point.
Whilst access to large sections of the river are at present limited, PALM are currently consulting with various agencies - including local landowners and the Corangamite Catchment Management Authority (CCMA) to investigate ways in which interested members of the public can access and interact with the river at various places with a view to increasing public involvement and support for what has been described as Victoria's most stressed river system.
More details on the Moorabool, its flora and fauna, cultural significance, maintenance and recreational opportunities can be found on the CCMA's  Living Moorabool Project pages.