Mosaics on the Barwon


...the word mosaic is from the Italian mosaico deriving from the Latin mosaicus and ultimately from the Greek mouseios meaning belonging to the Muses, hence artistic.

As an art form, mosaics have been around for thousands of years. The earliest known mosaics, dating to the third millennium BC were located in a temple in Mesopotamia. Both the Romans and Greeks used mosaics on the floors and ceilings of their villas whilst eastern and western Christians, Jews and Muslims all used mosaics to adorn their various places of worship.


The use of mosaics has continued to the present day where they often take the form of public artworks. Conveniently for the topic of this blog post, the Barwon also boasts some modest mosaic pieces in the form of a large structure near Fyans Park as well as some drinking fountains which have been given the mosaic treatment at a couple of points along the walking/cycling path.

In recent times, working with mosaics has also become popular as a leisure activity with classes being offered to cater for a wide range of tastes and abilities. For the last few years, mosaic artist and teacher, Rosemarie Kviz has conducted classes in her studio at the Old Fyansford Paper Mills, Lower Paper Mills Rd in Fyansford.
In 2015 I attended an open day at the Mill and saw the work of Rose and her students. It took almost a year however, before I finally took the plunge and started attending classes myself.
So, for about a year now, I have been mosaicking everything from flat plywood pieces to candle-holders and even a mannequin. My starting point was - unsurprisingly - a view of the Barwon River. 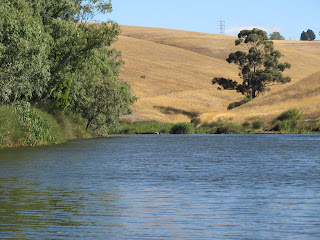 My second piece was also a Barwon scene, this time a depiction of the ruins of the Carrah Flour Mill on the north bank of the river about 3km south of Inverleigh and the topic of a previous blog post. 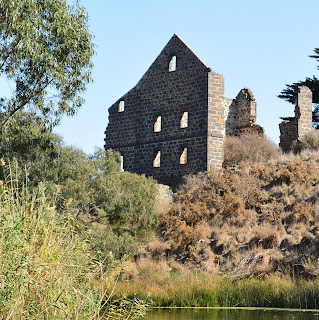 My third - and to date final - Barwon piece portrayed one of the many Rainbow Lorikeets I have seen along the river over the years. 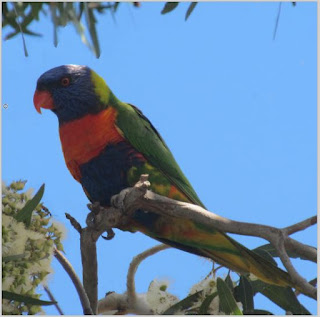 Whilst mosaics have traditionally been created by arranging tiles to create an image, in the computer age it has become possible to create digital mosaics and some time before I began creating physical mosaics, I also dabbled with creating a photographic mosaic. Realising I had amassed somewhere in the vicinity of 14,000 photos of the Barwon River (significantly more some two years down the track), I decided to see if it was possible to create a digital mosaic which used as many as possible of my Barwon photos.
After a significant amount of time spent editing, manipulating, finding the right program and finally compiling, I had created a digital mosaic composed of 10,000 unique photos, each in some way related to the Barwon.
The end result was a 150cm x 106cm version of the above image which now hangs on my wall. Each "tile" in the photo mosaic is a high definition 15mm x 10mm image visible to the naked eye. The windmill in the image was situated slightly downstream of Wilson's Rd, St Alban's Park however, it now lies in pieces on the ground.