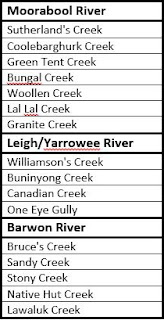 In the early days before bridges were built, fording creeks and rivers was inevitable and bad weather could have a significant impact, not only on the road surface, but also on the ease with which a creek or river could be crossed - if it could be crossed at all. Newspaper reports of flooding often also came with reports of drownings, both of animals and humans as attempts were made to cross dangerously swollen creeks and rivers. Another reason for diggers to consider carefully which route to take.
There is one other factor which could also influence the decision and which could significantly alter the flow of traffic along a particular road: maps.
And some of those maps will be the topic of my next post.