The weather yesterday was fine with only a light breeze, so I decided it was time to dust off the kayak and hit the water for the first time this season. My intended destination was a point a kilometre or so further upriver than where I normally paddle to as there were a couple of new geocaches which had popped up over the winter months which I wanted to go and find.
I knew I was going to have to get myself around/over a reasonably significant tree trunk to get there (which is why I usually stop where I do) and hoped I wasn't in for a swim. As usual, I headed up from Baum's Weir and passed a fisherman I have seen a number of times before. Being spring, the birds were out in force (I counted 32 different species throughout the course of my paddle) and lots of nesting was happening. I have no idea how, but I even managed to spot this Tawny Frogmouth sitting on a nest over the water about a kilometre upstream from Merrawarp Road.

I made it to the obstruction  in question and despite reports it was possible to get past without exiting my craft, decided the easiest option was to drag over in knee-deep water. I manage that no problem and was off again to deal with a patch of Azolla which was almost impenetrable! I'm hoping by summer when it will no doubt take over huge tracts of the river downstream, that it won't be quite as lush as this patch or paddling will be almost impossible. By the time I made it through I was so busy picking bits of it out of my hair that I didn't think to take a photo.
From there, I had clear water for another kilometre or so, passing the usual array of partially-submerged trees and branches. 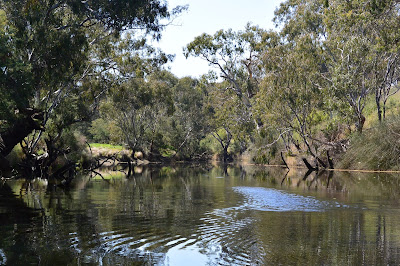 Eventually, I hit some fairly fast-flowing water which I had to navigate round. The previous time I was on this part of the river I was heading downstream and the water level was lower so, possibly it wasn't moving so quickly. This also happened to be the point at which I needed to find the second "cache" so after a little "portage", I made it to my destination and located the prize.
The river above this point didn't look like it was going to be any easier and I still had more than 9km to paddle back to where I started, so I turned around and contemplated my next move. I decided I'd take the quick route out - ie through the small rapids - and managed to pull it off without a dunking, but that was more good luck than good planning. It didn't look like much, but I wasn't surprised that the speed and volume were enough to push me around whether I liked it or not.
Back in calmer waters, I headed back down to do battle with the Azolla once again. As with the section below this part, there are some very pretty spots along here and the birds continued to appear. 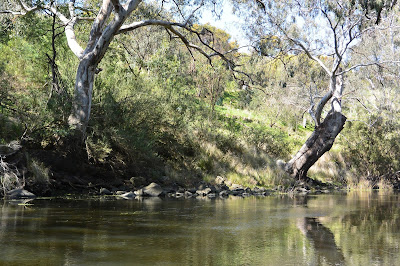 When I spotted what I hoped was a Grey Goshawk, but turned out to be a brown instead, I decided it was time to stop for lunch. I spent the next half hour trying unsuccessfully to get a photo of the bird in question as it in turn tried to encourage me to leave by flying around and calling regularly.
In the end, I ran out of time and departed with only a few blurry snaps, but did get some reasonable shots of it nearby nest.
From there it wasn't too far back to the Azolla patch and the tree, which I had to contend with once again, via some more of the usual scenery. 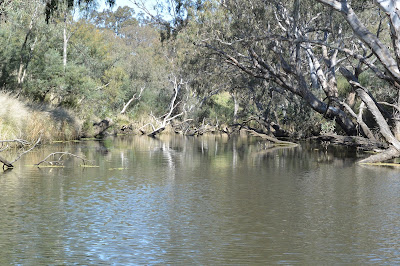 Strangely, when I did reach the fallen tree, I was surprised to find it had been sawn half through, at which point it had broken. It was a fresh cut (I could smell the sawdust) and I'm quite certain I would have noticed if this had been the case when I went upriver two hours earlier. There was no sign of whoever had done the cutting and I'm not sure what the purpose was as it still blocks the river. It did mean however, that I could (just) squeeze under and through some of the upper branches to get past which was good as I could no longer find the low point at which I had climbed over on my way up.
Slightly downstream near the second cache I needed to find, I also found the path I had taken on my way up (the same route I always follow) was now blocked by a small logjam which I am certain was not there when I passed earlier. Odd.
I carted around - noting footprints on the bank - grabbed the second cache and was on my way home, somewhat puzzled, but none-the-less pleased with the day's adventure.
Posted by Jo Mitchell at 10:17