From paper to paint - putting art through the mill

These days, recycling, re-purposing or even upcycling are all the rage and this can apply to buildings as much as any other obsolete item. Today, I had the chance (along with most of Geelong it seemed) to have a look at an historic building on the Barwon which is very definitely being re-purposed - and not for the first time.
I speak of course of the paper mill at Buckley Falls. I have written about the history of the mill before here, so I won't go into too much detail, but in short, it opened in 1878 and operated as a paper mill until 1923. After this time, it spent some years in use as an ice factory before being commandeered for the war effort in 1941 as a munitions factory. After sitting idle for some time, the mill was bought fifteen years ago by a man with a plan - Alex Robins.
Over recent years, a number of small businesses have moved into the premises, including a wire fencing company, a mosaic artist and as of today, another art gallery. According to the Geelong Advertiser of 4th June, 2015, the long-term plan is to convert a part of the mill complex into an arts precinct with a function centre, restaurant or maybe even a boutique hotel along with some housing.
And today, the mill was open for the public to come and explore. With other commitments for much of the day, I arrived about an hour and a half before closing time, to find dozens of cars still parked along the road as well as within the complex and many more visitors on site, all come to view this grand old structure. Much of the place is still in the condition it was left in all those years ago, with the bluestone carved from nearby quarries and locally-made bricks all very visible from both inside and out.
Not only were the businesses on display, but the millrace was accessible too. It was interesting after so much time spent looking up, to see not only the race at close quarters, but also the view from above, looking down on the river. This end of the race is quite overgrown with ivy and other introduced species, but still holds water and appears structurally sound, 137 years after it first carried it to the mill.
The Chimney seen in the picture below, presumably provided venting for some of the coal-powered boilers at the mill. These were used for a variety of purposes, from powering equipment to producing the heat required for various steps in the paper-making process.
Other vast concrete structures can also still be found in some areas. Presumably these also were part of the paper-making process, however I did hear it mentioned that these large vats were used for holding water for the ice-making during that era of the plant's history. 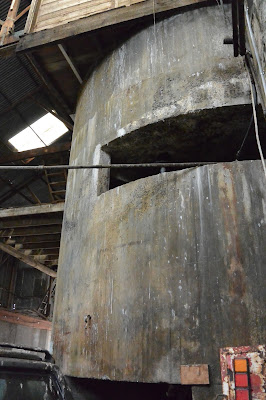 Now, having seen this new initiative for the mill it will be interesting to see how matters progress into the future and can be followed on Facebook.