From the rich reefs at Steiglitz on Sutherland's Creek to the deep gravel leads at Morrisons on the Moorabool River West Branch or Dolly's and Tea Tree Creeks, there was plenty of gold to be found for those who were willing to work for it during the Victorian gold rush.
And plenty were.
Of course, it wasn't just on the river and the larger creeks that the prospectors tried their luck. Every little gully and streamlet was scoured in search of gold-bearing soil and rocks, so as claims were taken up at Dolly's Creek, Tea Tree Creek and other nearby diggings, prospectors began to look further afield. One of the places they looked to was Mount Doran, a few miles to the north of Dolly's Creek and now part of the Lal Lal State Forest.
The workings around Mount Doran date back to 1858 and were most active throughout the 1860s. Recently I had the opportunity to investigate some of the area - in particular, a disused mine about 1.5km south of Bungal Dam. Our route in took us along rutted 4WD tracks, past the crumbling remains of a chimney, whose original purpose I have not be able to determine, but which I assume belonged to an early settler.
By the side of the track and scattered throughout the bush through which we passed were the overgrown remains of mullock heaps and shafts surrounded by scattered debris.

The mine of interest on this occasion consisted of a series of tunnels which extend into the side of a gully near Champions Hill and I suspect it is typical of the type of "cemented lead" which was excavated in the area. Entry is via a small opening which has silted up over time. Several trees have also grown up near the entrance.
As mentioned above, gold-containing soil and rocks would have been hewn from the tunnels by hand, carried out and then sluiced or puddled to extract the gold. Whether this was done onsite or the raw material was carted elsewhere for washing, I could not tell. The gully in which the mine is located was steep and in wet weather may well have some water, especially if it were dammed, however it is not a creek and certainly there was no water flowing when we were there. This along with other gullies in the area drain into the west branch of the Moorabool, less than a kilometre away.
﻿
As there were several passages branching off the main tunnel and even a ventilation shaft which extended up several metres from the roof at one point, I can only assume that the mine yielded enough workable material to make the miners' efforts worthwhile.


From local descriptions, such a mine would have been worked by a small group of men, possibly taking shifts and working by hand to dig and extract the rocks and soil. The number of branches off the main tunnel indicate that the miners were able to follow the lead in several different directions back into the hillside, stopping as the gold ran out.﻿﻿ In some places there was timber although whether it was used for structural purposes or perhaps as part of a trolley system I couldn't tell. Clearly the mine has not been in use for many decades - probably more than a century - however people have remained aware of its existence right to the present day. This is attested to by the graffiti on the walls of one branch of the tunnel which dates back to 1928 and was for me, one of the most surprising features of the mine.
﻿ A quick Google search indicates that the Birkett name has been associated with Lal Lal since at least the earliest years of the 20th century when a Clive Birkett was born there 1903. Whether one and the same, I know not. 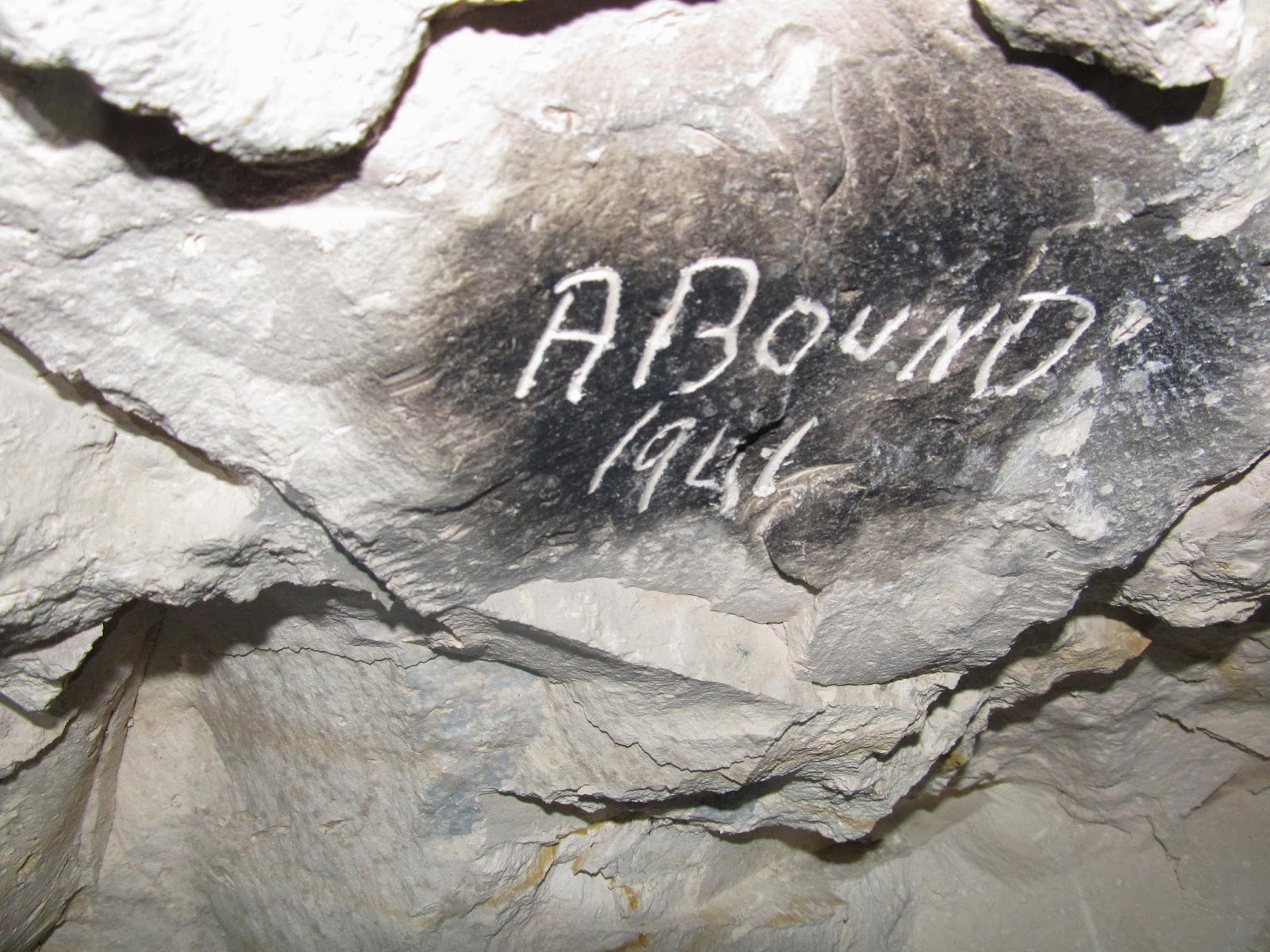 ﻿
Once again, a quick Google search turns up the Bound family in Lal Lal as early as 1914 when Alfred Charles Bound was born there. Even today there is a Bound Lane in the town and looking at the handwriting above I suspect we are looking at generations of the Bound family visiting the mine.
In addition to these examples there are names from 1945, 1980 and even one from 2014, creating what is possibly one of the most obscure genealogical records I have found to date.
﻿
Posted by Jo Mitchell at 17:23