I guess that not too many Australian rivers can boast of having their own poet, however during a recent search to see what - if any - poetry had been written about the Barwon, I was surprised to discover, not just the odd ditty, but an entire book of verse titled Barwon Ballads and School Verses.
The author of these lyrical tributes was of course, none other than James Lister Cuthbertson whom I discussed to some extent in my previous two posts: The old Light Blue and The school of the Barwon. In brief, he was born in Glasgow, Scotland in 1851 and arrived in Australia in 1875 where he took up the position of Master of Classics at Geelong Grammar School. He soon established a close relationship both with the headmaster John Bracebridge Wilson and with the boys under his care.
﻿﻿﻿﻿
Amongst the various legacies he left to the school was the precursor of the Corian, the school's annual magazine. He was a regular contributor both during his time as a teacher and after, signing his pieces as "C". Another lasting legacy was the introduction of the house system, along which lines the school is still largely organised to the present day. Inter-house music, debating and in particular sports competitions are stalwarts of the school curriculum. But even prior to this, in Cuthbertson's day, the Grammar boys were encouraged to participate in outdoor activities and "Cuthy" himself was a more than willing participant in this part of the curriculum. His love of rowing, hiking, camping and the outdoors was frequently expressed in his poetry and much of this also reflected the time he spent on the Barwon: 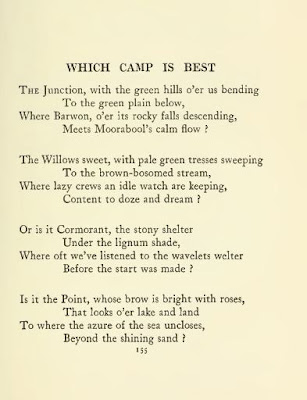 The above poem describes the various camping spots used by the the school (and others, including Geelong College), between Fyansford and Barwon Heads and is typical of the way he described the river and the surrounding countryside. His verse generally reflected the 19th century public school values of the day and much of his description of the Australian countryside could equally be applied to his Scottish homeland. One of his favourite camping spots and a recurring theme in his poetry was a place known as The Willows, which was (as mentioned in the previous post) in the vicinity of the Saint Albans Homestead. Whilst today's view of willows along Australian waterways is anything but flattering, the citizens of the 19th century saw them very differently.
And yet despite the English cliches, he also showed a great appreciation for his odd antipodean surroundings. He repeatedly referred to gum trees, ti tree and in particular, the golden blooms of the wattle trees. He also showed an acute sense of humour and a degree of local knowledge, when in discussing the "joys" of camping he noted "mosquitoes that bite like a dog".
On numerous occasions he described extended excursions to Barwon Heads and back with crews rowing into the night or starting out well before dawn. His poem The Anabasis of the Alice is a good example. In fact, he often gave the name of the boats crewed by the boys. There was the Cleopatra, the Iris, the Daphne, the Argo and of course the Alice which was mentioned on more than one occasion and even carried the crew of '89 to victory in the Head of the River - held that year on the Yarra.
But beneath all the eloquent words and the tales of sporting prowess, Cuthbertson was a troubled man. He was a homosexual working in a boys' boarding school in an era when being gay was a crime. I can find no public suggestion of impropriety of any sort either then or now. The introduction to the posthumous publication of "Barwon Ballads" says only that "little has been said of Cuthbertson's relations to the school in which he spent so large a part of his life. This is a matter that belongs to the school, and finds its appropriate place in the school records; but for the general public it has little concern".
Of course, Wikipedia is not so constrained and describes his battle with alcoholism, noting that the boys were assigned to look after him when he was incapable of doing so himself. This was known as "Cuthy duty". Whilst his friend John Bracebridge Wilson was headmaster, he enjoyed a relatively protected position and was even promoted to acting headmaster upon Bracebridge Wilson's death, however it appears that the new headmaster Leonard Hartford Lindon was not so tolerant and as I mentioned previously, Cuthbertson soon departed.
He spent his retirement, after a brief return to England, first in Geelong and then in the Melbourne suburb of Cheltenham. He spent holidays travelling to Queensland, fishing in South Australia and writing. Throughout the rest of his life he maintained his connection to the:
"...fair school, that in our hearts is queen,
With purpling ivy mounting o'er its tower..."
And this view of the south face of the school taken in 1895, less than a year before his departure was probably what Cuthbertson had in mind when he penned the following short verse:
THE SOUTHERN WALL
Strong tendrils of the ivy plants
That mantle on our wall of gray,
That brighten as the sunlight slants
Across the hills at dying day,
You image well the hearts of those
Our sons who do not break or bend,
But fight until the battle-close,
And die or triumph in the end.
Cuthbertson spent about 15 years in retirement before his sudden death on 18th January, 1910 as a result of an overdose of the barbiturate Veronal - a sleeping aid. At the time he was staying with a friend in Mount Gambier.
Four years after Cuthbertson's death in 1914 when Grammar moved to its present site in Corio, one of the newly opened boys boarding houses was given his name. Cuthbertson House or "Cuthy" as it is known stands overlooking the ovals and Limeburner's Lagoon as a lasting tribute to one of the school's most influential masters.
For those interested in reading more of Cuthbertson's Barwon Ballads and School Verses the book can be downloaded in PDF and a variey of other formats or read online through the California Digital Library here.
﻿
﻿