Another piece of the puzzle

In yesterday's Advertiser I noticed an article which was of immediate interest, concerning the walking/riding track which follows Waurn Ponds Creek over to the shopping centre and beyond. The creek which I have blogged about before, flows from Waurn Ponds, through Grovedale and Marshall and meets the Barwon a little south of the Breakwater bridges.
About this time last year, the pedestrian bridge which crosses Waurn Ponds Creek next to the road bridge on Pioneer Road in Grovedale was deemed unsuitable and removed. As a result, pedestrians wanting to access the Leisure Link facility from the east have been required to cross under Pioneer Road, use the pedestrian bridge on that side, then cross back to the opposite side of Pioneer Road using the traffic lights to complete their trip.﻿﻿
It has taken until now for the old timber bridge to be replaced with a new, steel structure which was dropped into place by a crane on Thursday afternoon. Not surprisingly, the Addy was on site to witness the installation and yesterday's paper ran an article under the somewhat corny headline of "Pedestrian solution to growth".﻿
Having seen this, naturally enough, I had to go and take some shots of my own. So, in weather conditions that saw birds flying sideways and rain squalls doing much the same thing, I headed over to have a look.
Not only did I find the bridge in place (although not yet completed or open to public access), but I also discovered entire road plant which I believe is in the process of completing a much needed upgrade of the Pioneer Road/Princes Highway intersection. These works also include some asphalt laying on the approaches to the bridge and path leading to Leisure Link and presumably also to the traffic lights which allow access to the remainder of the track round to the Ring Road.﻿﻿

﻿
And then, on the way home I happened to take the new Breakwater Bridge. As I was making the crossing, I noticed some newly laid bitumen and so headed down to have a look. A short walk through a small amount of mud in inappropriate footwear and I was at the base of the new bridge on the west bank. Sure enough, there was a new path leading off away from the river towards Barwon Heads Road.
So, back in the car ﻿to have a look at the other end and I discover that the now closed off section of old Breakwater Road has some new fencing and traffic controls and has been included in this new section of track which links the Barwon River Trail to the South Barwon Reserve and the Waurn Ponds Trail .
Now all they need is some decent signage indicating where the trail takes you and a whole heap of landscaping and revegetation on the empty section of land left after the Geelong Motocross Club vacated the site making way for the new bridge in 2007.
And then another piece of the puzzle which is Geelong's trail network will be complete.

UPDATE: as of Tuesday, 11th September work on the bridge is complete and tradesmen are working on pouring concrete for the paths leading to and from the new bridge. A quick question to one of the workmen suggested the work may be complete within the next week or two. 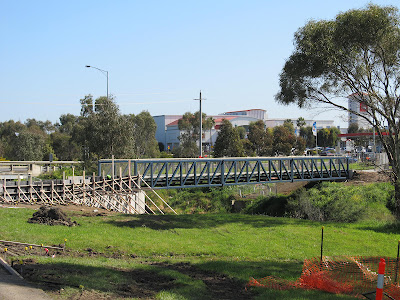