"It's lovely to live on a raft"

Over the recent long weekend, we dragged out the bikes and went for a quiet ride along the river. As usual, I had the camera in hand and was looking for suitable material. For the first few kilometres nothing interesting presented itself, however as we approached Queen's Park, for a moment I found myself wondering which river we were riding along and indeed in which century.
There, being propelled downstream by two young guys in true Huckleberry Finn-Tom Sawyer style was a raft. Upon closer inspection, the pair were older than Mark Twain's heroes and there had been certain concessions to modern technology, but it was still a bona fide homemade raft.﻿﻿
The 19th century logs of Huck's craft had been replaced by modern industrial pallets and in time-honoured Australian fashion, buoyancy was provided by four 44-gallon drums lashed to the pallets with synthetic twine. In case there was any doubt as to the nationality of this proud vessel, a small Australian flag could be seen fluttering of the starboard bow. In keeping with various pictorial representations on the cover of Mark Twain's Adventures of Huckleberry Finn, this raft had a tented structure composed of poles and black plastic held up by guy ropes.
But here perhaps, the similarities end. The Barwon through Geelong could hardly be mistaken for the majestic Mississippi River which flows for over 4000km and includes in its catchment some 32 US states. By comparison, the Barwon's 160km length seems somewhat insignificant. At some points, the Mississippi is up to a mile in width - a boast which can certainly not be made about any part of our river.
Nor is or was the Barwon a source of transport and livelihood for the region in the way which the Mississippi was in the glory days of steamboat transport. The weirs and breakwaters which span the river between Geelong and Barwon Heads mean that a continuous journey by boat is impossible even if water levels were sufficient to allow passage.
So much for visions of hair-raising escapes and feats of derring-do. The Barwon just isn't that kind of river! 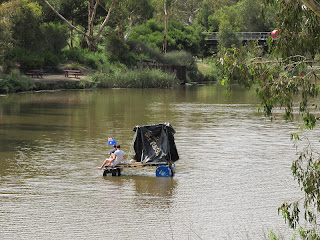 But for now, back to my mystery rafters. They were progressing along the river by way of a pair of plastic paddles - once again not exactly standard 19th century issue - and somewhat curiously had a soccer ball on board with them. Whilst the raft was of comfortable proportions, it was not exactly suitable for a game of kick-to-kick so I can only assume that they had a destination in mind which would enable such activity.
I was also curious as to the significance of the writing on the "tent" part of the raft. Suspecting that it was not related to issues of 19th century racism in the US, I asked my friend Google for an explanation. It soon informed me that Costa Del Fuego translated literally meant "fire coast", but it also told me that Costa Del Fuego was the name of a heavy metal music festival held in Benincassim, Valencia in Spain. It appears these rafters were also into loud music.﻿﻿