So who was Geoff Thom?

Today I visited a section of the Barwon which I have seen from a distance, but never visited. I pulled off the Ring Road into what is presumably a service area at the new Geoff Thom Bridge which spans the Barwon upstream of Baum's Weir and had a look around.
The river at this point has a rural feel to it, despite the constant traffic noise from the bridge overhead. Whilst there has been some planting aimed at regenerating the area under bridge which was disrupted by construction, not too far away, the river banks are grassy and scattered with a few eucalypts. Whilst I didn't see a wide variety of bird life, there was none-the-less constant bird noise, making a distinct counterpoint to the sounds of traffic.
The bridge itself is the usual modern concrete construction consisting of a pair of 110m long spans supported by pairs of pylons which rise from the banks and the riverbed itself. I snapped a few photos and had a quick look around, but there was lots of long grass and the weather was warm, so I didn't venture too far afield.﻿﻿
At the present time, this  part of the river isn't exactly being promoted as a tourist destination so there is not a great deal to see, however it it my understanding that there are long term plans to extend the walking track from Baum's Weir, the extra 600 or so metres required to reach the new bridge and on the opposite bank, it is suggested that a shared trail He will be developed connecting Buckley Falls to Mount Brandon Peninsula and on through newly-developed parkland to Wandana, but what the timeframe for the implementation of these improvements might be is not indicated.
It also occurred to me as I was looking around, that I had no idea who Geoff Thom was. I know who the McIntyre Bridge, the James Harrison Bridge, even Prince's Bridge were named for, but who was Geoff Thom? Google as it turns out was relatively unhelpful giving me a photo of the bridge and an reference to an article which was not on-line. A quick query to a local mailing list however solved the problem. 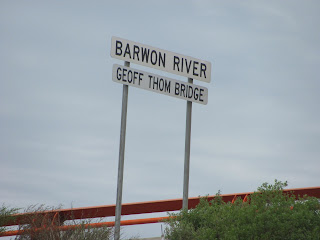 Geoffrey Walter Thom was born in Geelong West in April 1910. He was an accountant, first with Ford and then running his own practice. He saw military service in New Guinea, was a member of numerous local committees and an active member of the Ashby Methodist Church as well as being a Rotarian, sportsman and politician. From 1946 until 1958, he was active as a Geelong West city councillor, serving as mayor from 1955-1957. Following on from his stint in council he was an elected member of the Victorian Legislative Council from 1958 until 1970, serving as whip for the state Liberal Party in the mid-1960s under the government of Sir Henry Bolte.
In the 1960s, during Thom's time as an MLC, the idea of a ring road to carry traffc around Geelong was first tabled. He was a strong supporter of plan, lobbying parliament to get the project up and running.
It may have taken nearly fifty years for the ring road to become a reality, however the naming of the bridge over the Barwon in Thom's honour, recognises the early efforts and the foresight of one of Geelong's noted politicians.
Posted by Jo Mitchell at 17:23