Grist to the mill...

Buckley Falls is probably one of the more interesting stretches of the Barwon as it runs through Geelong. As mentioned in an earlier posting, it is named for the escaped convict William Buckley who escaped from a fledgeling penal colony established near what is now Sorrento. At some point he came upon members of the local Wathaurong tribe who mistook him for the ghost of the warrior Murrangurk. Buckley lived with the tribe for thirty years before re-joining white society.
The history of the river at this point is also a combination of ancient Wathaurong and more modern European settlement. To the Wathaurong, the nearby Bunyip pool was a source of food. Yarrum Mordong is the Wathaurong name for this part of the river. Yarrum means rapids or a waterfall. Mordong means eel.
To the newly arrived Europeans of the 19th century, this part of the river was a source of power which could be harnessed for industry and not surprisingly one of the earliest recorded was flour-milling. The history of flour-milling at Fyansford seems to me to be somewhat unclear. It is widely reported that Henry William Collins opened a flour mill on the banks of the Barwon in 1845. Whether this is the same establishment as the Barrabool flour Mill which started operation in 1849 on a projection of land upstream of Buckley Falls, known as Mt Brandon Peninsula, I cannot determine, however a source stating that the latter was built in 1849 suggests that they were separate establishments.
Records indicate that the Barrabool Flour Mill was a five-storey, bluestone structure whose 90cm thick walls were constructed from locally quarried stone - perhaps from one of the three quarries on the opposite bank of the river. It was powered by an "undershot" wheel and water was drawn from a channel which ran along the south bank of the river. Nowadays, there is no sign of the mill or an associated onsite cottage and no-one seems quite sure where the mill was located. A comparison of the two photos to the left however, is interesting. 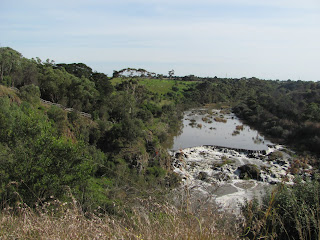 It is also interesting to note the extent to which the banks on both sides of the river have been revegetated over the intervening decades as well as the presence of the lower weir (not built until 1927) in the lower picture.
The only traces of the mill and its surrounds now visible are a few non-native trees (possibly the cyprus growing on the high ground of the peninsula) and the remains of the outer race wall which can still be seen as I discovered for myself yesterday on another expedition to see a part of the river which, for some unknown reason, had to this point escaped me.
Yesterday's saunter took me down to the south bank of the river opposite the car park at Baum's Weir and along an informal track, back towards Buckley Falls. Here, to my delight, I discovered the remains of the old bluestone race. Originally about 244m in length, it ran from a weir upstream down to the mill. Whilst not explicitly stated, I believe that the weir was in fact Baum’s Weir which is said to date from the 1840s, although no-one seems to know when or by whom it was built.
Regardless of when exactly the mill was built, it would seem that by 1854 at the latest and probably earlier, an Englishman named John Highett was the owner. He may also have had to rebuild the mill subsequent to substantial flooding in 1852. I haven’t been able to turn up anything which indicates how long Highett ran the mill, however some time after his death in 1867 and with the opening of the Barwon Paper Mill on the opposite bank of the river in 1876 (more of which later), business appears to have dropped off. After standing idle for some years, the mill reopened. Confusingly once again, one source states that in 1887/1888 it reopened as the Fyansford Starch Factory, milling rice instead of wheat. This is supported by a contemporary photo showing the mill and labelled accordingly. It states that the mill buildings had almost completely disappeared by 1938. However, another reference published by the City of Greater Geelong, indicates that the mill was sold in 1888 and subsequently operated as a jam factory on a limited scale. This reference claims the building was gone by 1908. 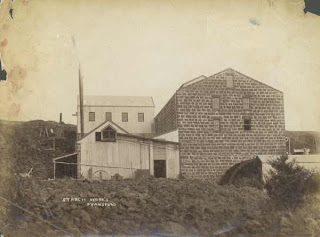 A couple of possible explanations for these differences spring to mind, such as the possibility that the two businesses used the buildings jointly or perhaps the tenure of the starch factory was very short-lived. The difference in dates given for the disbanding of the mill buildings seems a likely transcription error.
So, who was the mill's owner John Highett and what was his association with the Barwon River? Highett (1810-1867) was an Englishman who migrated first to Van Diemen's Land with his brother William (a noted politician) before arriving in the Port Phillip district in 1837. He took up farming land overlooking the Barwon on the south side of the river and built a substantial house at the top of the hill overlooking much of the region in what is now Montpellier Park. The house later became the Montpellier Hotel, Picnic Ground and Pleasure Gardens and was run by Edwin Hooper. The surrounding land was also used for the cultivation of grapes, with vineyards extending down to the river, into the nearby Barrabool Hills and as far as Pollocksford. The Montpellier name derives from a town in Southern France known for its wine growing.
The house no longer stands, however the footings can still be seen in the park's grounds. The other, perhaps more permanent reminder of Highett's contribution to the development of the area in the early days of European settlement is the suburb of Highton, which was originally given the name Highett's Town. Of course, Highett Road which connects with Buckley Falls Road below the Bunyip pool is a further reflection the area's association with John Highett and his family.
Posted by Jo Mitchell at 10:03